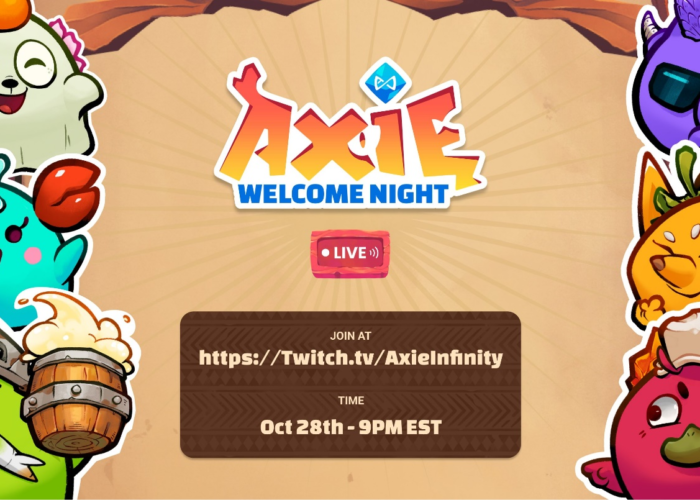 Recently, the Axie Infinity metaverse has witnessed quite many events, especially in this season of Halloween. The popular p2e online platform announced mouth-watering bonus rewards for a Halloween special – Axieween. Similarly, it recently launched its Axieween Challenges featuring catchy rewards.

In addition to its many endeavors, Axie Infinity has announced that it will be hosting a welcome night for aspiring Axie trainers. The event is scheduled for Friday, October 28, 2022, at exactly 9 PM EST. Also, the program will be live on the platform’s Twitch channel, AxieInfinity, with more than 54,000 followers.

Notably, the event stated for Friday is Axie Infinity’s first official welcome night for aspiring Axie trainers. Through the program, attendees can learn more about Axies and the entire Axie Infinity platform. Top of it all, there will be attractive prizes in form of giveaways.

• Getting started with Axie: step by step ✨
• Navigating the marketplace 🧿
• Tips and Axie giveaways 🛠️

See you this Friday at 9 PM EST!

What Does the Axie Welcome Night Entail?

The Axie welcome night will be an experience to remember for all attendees, as it will feature quite many events. Also, the program’s main purpose is to orient them about the Axies and their entirety. This way, they can be officially welcomed into the platform as members and Axie trainers.

Axie Infinity: Getting Started with Axies

Axies are virtual creatures located in the Axie Infinity metaverse, where users can breed, train, trade, or battle with them. Each Axie is uniquely designed in costume and abilities, meaning that some are stronger than others. Notably, every Axie Infinity player’s goal is to breed or train the best Axies to win fights and earn rewards.

“Axies are fierce creatures that love to battle, build, and hunt for treasure.” – Axie Infinity.

Furthermore, all Axies fall into six categories: Aqua, Beast, Bird, Bug, Plant, and Reptile. Each category comes with its special features. Thus, an Axie’s category plays a huge role in what kind of strengths and weaknesses it possesses.

How Many Body Parts Does Axies Have?

Since Axies are characters that perform roles, they obviously should have body parts. Of course, they have body parts that allow them to take action during battles, like card changing. But how many?

All Axies’ bodies are divided into six parts. These parts help the creatures to either launch or withstand strikes during fights. They include:

Notably, the back, tail, horn, and mouth help to determine usable cards during fights. A major reason is that these body parts come with corresponding cards. As such, they are always in handy during fights.

Features and Statistics of Axies

All Axies possess four features, better known as their statistics. They include: Skill, Health, Speed, and Morale. With these stats, every Axie Infinity player’s goal is to train his Axies to reach higher stats.

These stats can tell whether an Axie will be effective or not. This is because some Axies have higher stats, giving them higher advantages over their weaker counterparts. By increasing an Axie’s stats, it is better positioned to win battles, thus, fetching the owner more rewards.

An Axie can undergo breeding as much as seven times. And to nurture Axies, users need to earn the Smooth Love Potions (SLP) by playing the game. For SLPs, users can venture into PvE Adventure mode and the PVP Arena.

As the popular saying goes, “great things start small”, breeding requires patience. Users are expected to exercise a great deal of commitment and patience before they can produce offspring.

Furthermore, there is no guaranteed way to breed a paradigmatic Axie team. As such, players are free to test out various breeding strategies that suit their requirements.

As mentioned earlier, there is no perfect strategy for breeding the best and strongest Axies. This is because Axies are unique and they are full of discoveries. So, it is best for players to study them rather than look for some shortcut to breeding “god-mode” Axies.

Here are a few tips to help players while trying to breed the best Axies:

Similarly, users can buy Land on the marketplace. This Land signifies that they are entitled to portions in the Lunacian metaverse. The marketplace is one of the most interesting features of the Axie Infinity platform.

A Brief About Axie Infinity

Axie Infinity is a digital platform where players own pet creatures known as Axies. Upon desired development, these creatures are utilized in battles and exploration of the Axie metaverse. Also, they can breed with other Axies, regardless of the species.

Additionally, Axie Infinity is owned by popular gaming firm, Sky Mavis, and it is built on the ever-functional Ethereum blockchain network. The network ensures that all transactions in the game are smooth and secure. Since its inception, Axie Infinity has remained one of the best play-to-earn games of our time. 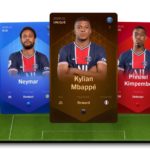 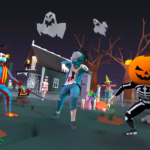