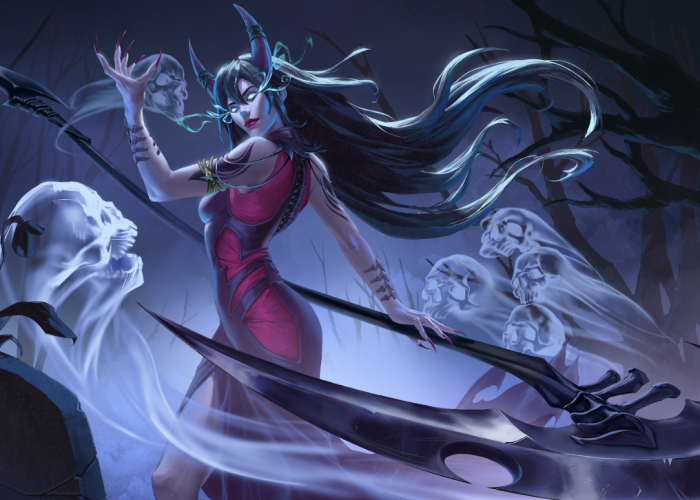 In order to determine how closely Gods Unchained resembles Hearthstone and how it differs from it, both players and the game’s creators have compared the two games.

This is a comparison that has been going on for years, with an article titled, Gods Uncahined, Hearthstone Clone or Evolution?, being written back in July 2018 by Rico Zuñiga.

What is Gods Unchained?

Players compete against one another in Gods Unchained (GODS), a visually appealing Metaverse NFT card game, using fantasy cards. To win cryptocurrency rewards, players must defeat their opponents in battles that begin with a card deck. An ERC-20 token called the GODS is employed for in-game asset purchases.

The token has a market capitalization of $25 million and is currently trading at $0.73. The total supply is 500 million, with 23 million in circulation.

You don’t own items if you can’t sell them, according to the game’s motto. Users have complete control over their NFTs and tokens in Gods Unchained, setting it apart from other metaverse games. Although it is a requirement to play the game, the GODS token is not a governance token. The more battles a player wins, the more their status advances, and the more money they make.

Even though the ecosystem is based on Ethereum (ETH), players won’t experience exorbitant gas costs like they would in a blockchain card game like Axie Infinity (AXIE).

It is constructed using Immutable X, an Ethereum layer-2 scaling solution that enables users to create, exchange, and transfer assets for pennies on the dollar. On the Gods Unchained market, over 700,000 NFTs have already been exchanged, beating popular games like Sorare.

What kind of game is Gods Unchained?

The gameplay of Gods Unchained is somewhat reminiscent of that of other TCG games, such as Magic, Legends of Runeterra, and Hearthstone. Theme-based decks are constructed by players around one of the six available Gods (Death, Deception, War, Light, Nature, and Magic), and they engage in 1v1 combat with an opponent.

As stated on their official website, the Gods Unchained team is open about their affiliations with Magic: The Gathering and Hearthstone.

“Gods Unchained combines the best of Magic the Gathering and Hearthstone in a competitive, strategic and well-balanced card game.”

Plus, Stela Gineva at p2e Diary has written a list on games like Clash Royale, and Gods Unchained makes the cut. So if you’re looking for similar games to GU, check it out.

(Or, head over to Billy’s guide to Splinterlands, which is a card-game with an extra twist!)

Why is Gods Unchained like Hearthstone? What are the main differences?

Even the Gods Unchained teams recognise this, and have created a player’s guide for those used to gaming on Heathstone and looking to try out Gods Unchained.

Where are the NFTs if this game is F2P, you might be wondering. It’s fair to say that the GU economy is a cross between the Hearthstone card pack loot box model and the Legends of Runeterra discrete card purchase model, with some subtle differences.

At the start of the game, players receive “plain” cards—i.e., non-NFT cards—that have been opened from card packs. These cards can be combined with additional plain copies and the necessary tokens ($GODS + FLUX) to produce NFTs, which are then minted, and can be used to earn.

As someone who has played Hearthstone for a long time you may find this is the most interesting part from a gameplay point of view.

It’s become fairly obvious over time that Hearthstone’s tempo, rather than the higher-variance system made popular by Magic: the Gathering, where your resources are essentially tied to card draw and mana screw or mana flood decides a sizeable portion of your games, is the governing gameplay element. This also applies to pretty much any card game with the same sort of guaranteed flat mana increase turn after turn.

What is the “Hearthstone model?”

Well, if you can even call it that, the Hearthstone model basically mandates that powerful and expensive cards have an immediate and devastating effect upon being played.

This is due to the fact that engaging them in battle takes up a lot of your time, which you could use more effectively if you were ahead of schedule rather than behind.

The mana lock system, an intriguing variation on flat increments that evens out power spikes and adds more decision points throughout a match, is Gods Unchained’s answer to this problem.

The resource ramp basically proceeds as expected up until turn five, but after that, each mana gem has multiple locks on it, delaying its availability for more than one turn. So, you won’t be able to use your sixth mana gem until the seventh turn and your seventh mana gem until the ninth turn. This gives you and your opponent more time to trade in the middle game.

After that, the ramping process slows down even more. Your eighth gem has three mana locks, and your ninth gem has four. This means that you won’t be able to use them until turns 12 and 16, respectively.

How does this affect how the game is played?

It increases the likelihood that your big bombs will shine and prevents the next turn’s best play from overshadowing them. It also means that cards that come out late in the game can be very, very strong.

On the other hand, the mana lock system forces early-game minions into play for even the slower decks, which means their power level doesn’t need to be capped the way it would in a game like Hearthstone because they are useful tools for all archetypes.

Basically, you won’t be wiped off the board by aggressive decks in the early game, and control decks can’t just wipe you out with an AoE in the late game. This makes for more back-and-forth games with more decision points.

The many ways to play and how cards work

Hearthstone maintains an absurdly low level of complexity, let’s face it. Things like Twinspell, which were released more than five years ago, are still regarded as ground-breaking innovations and a selling point for a new set.

The true Charge power levels were only discovered after many years. Gods Unchained is comparable to many other card games in the genre in that they offer players much more intriguing attributes to experiment with.

It’s also nice to see different ways to protect yourself. For instance, how the main difference between Protected and Ward is how spells and direct damage affect them.

With this as a starting point, there will be a wide range of cool card text tools to look forward to in the future.

Even if you’ve played a lot of card games before, you’ll feel right at home with Gods Unchained. The factions and card designs make a lot of references to what other games in the genre have learned, and the game’s unique systems have elements that feel both familiar and new.

In many instances, the extra features give them a completely new perspective and offer a totally unique gameplay experience.

One particularly intriguing way to add counterplay and metagaming options while also altering the way the various games play out is the ability to select your God power prior to each match. Due to the developers’ flexibility, God powers that are stronger than those found in Hearthstone or other games of a similar nature can be created.

Despite having a good design, GU is significantly smaller than other popular Web2 TCGs like YuGiOh Master Duel, Hearthstone, and Magic: The Gathering Arena.

DAPP radar indicates that GU DAUs have been trending between 10 and 12k over the past few months of 2022. Despite the low numbers, a DAU/MAU ratio of around 20% is considered to be quite good.

With the introduction of the Weekend Ranked Feature in 2022, GU saw significant DAU growth, up about 15k from 2021; however, the game has seen a -25% month over month engagement decline since January of 2022.

The difference between sellers and buyers is a bad sign for the game because it shows that there is an imbalance in trade, which slows down the pace of trading.