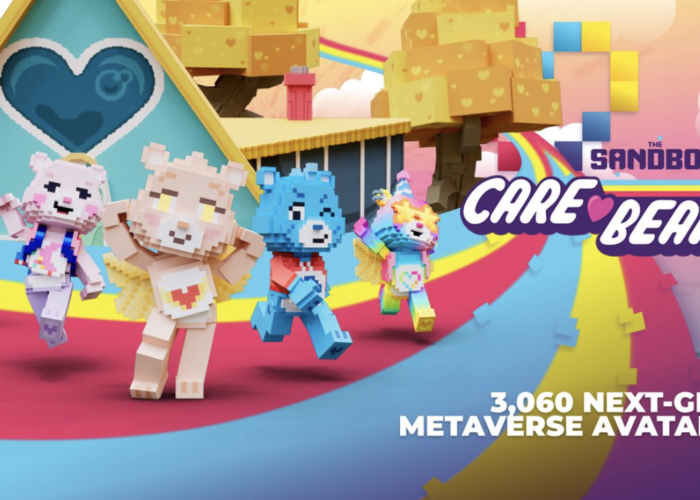 The Sandbox’s Official Twitter account announced that the whitelist minting of their exclusive Care Bears avatars is open! Time to grab your bears as quick as you can before they’re snapped up!

However, this is a whitelisted user-only private minting event. There is no cause for concern for those who did not make the whitelist, though. The open minting event will start the following day. The avatars can be yours after just 24 hours of waiting.

All About the Care Bears Avatars in The Sandbox

Each of these Care Bears is exquisitely handmade, giving them each their own distinct personality. Users will be able to access the Sandbox meta as well as other exclusive functionalities thanks to them.

“Coming at you, fluffy and cute!” reads the description on the official The Sandbox website. The Care Bears are entering The Sandbox as playable metaverse avatars. Combining tradition with web3, you can discover endless experiences like never before. Meet friends, discover the Care Bears experience, and earn SAND as a unique Care Bears.”

Additionally, The Sandbox notes that there will be ten distinct designs for the Care Bears. There is no connection between this and rarity. It’s just a cool feature that will highlight the distinction of these incredible NFTs. The idea is to make each Care Bear unique and warm in its own way.

What are the Different Avatar Rarities for Care Bears Avatars?

There are numerous distinctive 1/1 designs as well as more than 100 hand-crafted traits.

It will be much more difficult and expensive to mint the more expensive Unique Care Bears, as it is with all NFTs. However, community users who are whitelisted will be given priority if they want to mint the expensive NFTs.

But there are 5 rarities across 3,060 Care Bears Metaverse Avatars:

What is a Whitelist?

A list of individuals who will have priority access to mint NFTs at a specific time and date is known as an NFT Whitelist. Buyers who are on such a list are able to avoid paying exorbitant secondary prices and significant transaction costs for well-known NFTs.

NFTs “drop” or launch on a particular day that has been pre-scheduled. You’ll have a limited window of opportunity to purchase a newly created token before it becomes available to outside buyers if your name has been added to the whitelist for that NFT.

Your cryptocurrency wallet will be listed on the NFT whitelist while you wait for your time slot. By guaranteeing early access to true supporters and preventing the competition and gas wars that are frequently associated with successful NFT projects, this mechanism makes NFT launches more democratic.

When did NFT Whitelists Appear?

Whitelists didn’t suddenly appear in the NFT world. They were created as a direct reaction to a few major problems that plagued NFT projects.

What Other The Sandbox Avatars are Worth Minting?

Playable avatars are now an essential component of Sandbox metaverse. In essence, these are unique characters that users can employ to explore the Sandbox and acquire SAND.

Because these characters can now be created by third parties and shared with their communities as playable avatars, The Sandbox is now accessible to them as well. This has aided The Sandbox in growing its user base and encouraging greater creativity in how things are carried out.

A visit to the Sandbox website (revealed at http://sandbox.game/avatars) allows players to link their wallets and begin exploring the virtual world.

The Sandbox previously declared that minting for Sergio Aguero’s Kuniverse avatars would start at the beginning of November.

In order to access Sergio Aguero’s metaverse space on the Sandbox, users will need The Kuniverse Avatars, which are NFT-backed digital collectibles, according to Nyambura at Play to Earn Diary. 9,320 avatars with varying levels of rarity that grant players access to the game are distributed.

Additionally, the avatars all draw inspiration from Sergio Aguero’s football career and depict some of his most memorable. Kuniverse avatar purchases are limited to five per user’s wallet.rs per wallet.

These ape NFT holders had easy access to the Sandbox meta thanks to a thorough partnership with Cyber Kongz.

The Bored Ape Yacht Club tweeted that members could now play as their ape in the Sandbox Metaverse in August 2022, following the Sandbox’s tweets about Alpha Season 3 starting later that week and the playability of avatars. “Thanks to @TheSandboxGame Bored Apes can now play around with their Sandbox avatars using the link below,” the club tweeted.

Blaze Games and the Gutter Cat Gang had intended to construct Gutter City as a 22 estate in The Sandbox, but Gutter Labs slid a new set of blueprints across Blaze Games’ desk that showed how Gutter City could be expanded to take up the entire 33 plot. The construction build-out was expanded after the teams agreed on construction strategies.

There are plenty of activities going on in Gutter City to keep the Gang busy. Grab your friends and head to the courts for a game of GutterBall. You can also:

You can access everything Gutter City has to offer by using these voxelized avatars of your Gutter Cat, Rat, Pigeon, or Dog. Additionally, users will be able to use this avatar to represent the Gang on all lands that are accessible in The Sandbox.