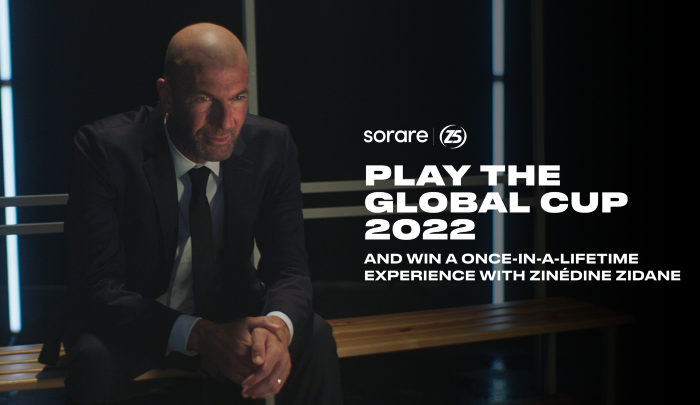 The Sorare: Global Cup 2022 is currently on and the floor is open to as many Sorare Managers as possible. According to Sorare, all Managers are free to participate and showcase their exceptional managerial skills. With this, they can earn amazing rewards as well as exclusive perks at the tournament.

At the previous announcement, Sorare emphasized on the need for Managers to hit the top spots on the leaderboards. Notably, there are two types of leaderboard in the competition. The first one is known as the Matchday Leaderboard and it shows rankings for every Matchday.

The top 5 Managers on the Sorare #GlobalCup22 overall leaderboard at the end of the tournament win an expenses paid trip to meet Zinedine Zidane in France.

Who is Zinedine Zidane?

Popularly known as Zizou, Zinedine Yazid Zidane is a French professional footballer who played as an attacking midfielder. He was widely known for his excellent ball controls, dribbling skills, ball touches, strong determination, and role model traits. In short, Zidane is one of the greatest icons in the history of football.

He started his footballing career in France at AS Cannes before proceeding to Bordeaux where he came into the spotlight. After a successful run at Bordeaux, he moved to Italian top-flight Juventus where he won two Serie A titles. Then, he played for Real Madrid, winning the UEFA Champions League and La Liga trophies for his club.

In the international scene, Zidane was a national hero, having played for France 108 times. His exceptional performances earned France the 1998 FIFA World Cup, after scoring a brace in the final. Also, he was awarded the FIFA World Player of the Year titles in 1998, 2000, and 2003.

Since his exit from active football, Zidane went on to become a football manager at Real Madrid. With a display of intelligence and class, he became the first coach to win the UEFA Champions League three consecutive times. Before leaving the club in 2021, he also won the FIFA Club World Cup and UEFA Super Cup twice each.

What is the Sorare: Global Cup?

The Sorare: Global Cup is a fantasy football competition in which players deal with cards featuring national team players. The global tournament features numerous players who are representing their countries at the big international scene. With the Global Cup kicking off with the 2022 edition, Sorare hopes to host more, with more benefits.

This year’s Global Cup tournament will be played with Common cards. These cards cannot be sold or traded, according to Sorare. Also, the tournament will follow the usual 5 players per team style of gameplay.

At the end of the Sorare: Global Cup 2022, all Managers will be ranked on the Overall Leaderboard. Following the ranking, Managers that end up at the first 5 spots will get an exclusive treat to Marseille, France. Notably, they will be meeting with Zinedine Zidane in a once-in-a-lifetime experience.

Furthermore, the trip to France will be catered for by Sorare. Also, each winning Managers is allowed to bring a guest of their choice along to the experience. Afterward, they will play a football match with the iconic football manager.

The football icon-turned-manager shared his views about coaching and managerial roles. According to him, coaching is not a task one achieves in a jiffy. Rather, it is built with determination, experience, and the right mindset.

“Coaching is about your beliefs, your philosophy, your skills. But the essence of football is playing.”

Zinedine Zidane knows a thing or two about managing. And for the top Managers during Sorare #GlobalCup22, he has a very special reward in store. 👀 pic.twitter.com/wNquPiO9HA

He went on to explain how important it is for the players to enjoy the game before managing can be successful. According to him, enjoying the game makes it easy for all players to perform better. That way, managing a world-class team will be easy and results will come as expected.

“My philosophy, the essence of football is about playing. We have to stop thinking the work needs to be put in first. Yes, we know. We know we have to build defense to get the first goal. But it’s more important for the player to enjoy it more than anything else. But what’s really important is you can’t make a team with only Ballon d’Or players. It just wouldn’t work. And those who are “on the sidelines”, who aren’t as good technically, or just don’t have the same quality, they’re just as important to me as the others. It’s true. It’s the complexity of training and managing a group.” – Zinedine Zidane, former Real Madrid Coach.

Does Coaching Require Much Work?

The three-time UEFA Champions League winner continued by talking about how much work needs to be done as a manager. In his comment, he emphasized that there is a lot of work going on behind any “successful” team. Interestingly, he used the movie industry as a good example.

“Yes, that’s what we see on the outside, the fun side,” commented Zidane on how much work coaching requires. “But there’s a lot of work behind it. You work on this for a week, for a month, three months, six months, to get these results. Coaching is not a matter of … Yes, a match lasts 1.5 hours, it’s just like with a film. It takes the two years to make a film that long.”

Additionally, the three-time FIFA World player of the Year believes hard work comes after players are all in the game. In the absence of the fun and excitement to play, coaching will be hard and expected results cannot be achieved.

Reactions from Members of the Sorare Community

As expected, the announcement sparked the interest of many Sorare players. With the Zinedine Zidane experience, they are more than excited. Additionally, they see it as a way of bringing fantasy sports to mainstream.

@SorareUnicorn applauded Sorare for onboarding football icons on its platform. Notably, Sorare has onboarded the world’s best players including Lionel Messi and the retired Zinedine Zidane. The tweeter said: “Rolalala ZIZOUUU!!! @Sorare bringing out the GOATS back to back!!!”

Also, @edunat25 expressed his love for Sorare. Expressing his delight at the Zinedine Zidane experience, he commented:

“NOOOOOOOOOOOOOO!!!! TE AMO @Sorare TE AMO. This is a Spanish form of saying: “I LOVE YOU @Sorare I LOVE YOU.”

Summarily, the Sorare community is happy with the experience. Also, this will propel more Managers into the Sorare: Global Cup. This way, they can compete against their friends, hit top leaderboard spots, and grab their Zinedine Zidane experience.